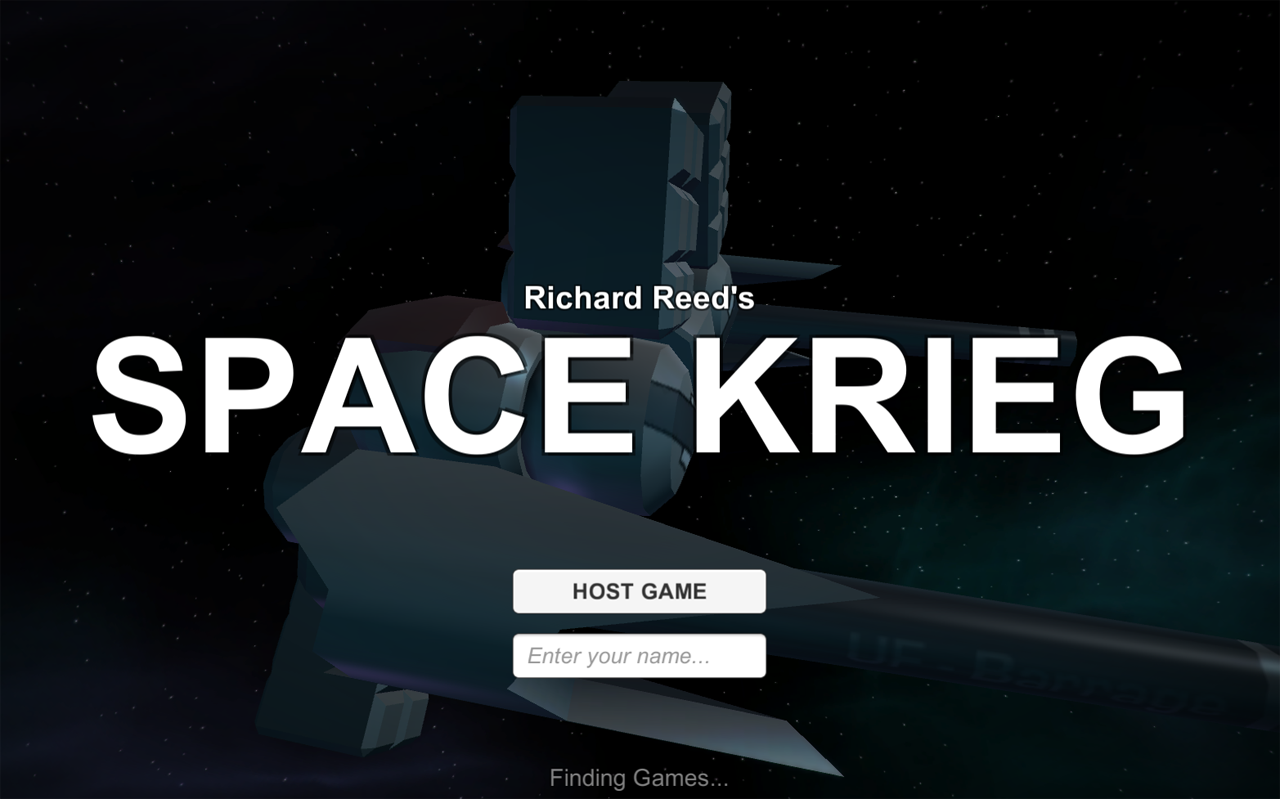 It's probably about time to explain a little more about what Space Krieg is and how it all works.

Building on from the Krieg Jam we had a couple of weeks ago, the game is now in a (whisper it) playable state. Leastways, people are able to join games, choose ships, fly those ships and shoot the other players' ships until they blow up. It's got a way to go before it's the eSport we want it to be, but it's still pretty damn good fun, even at this embryonic stage.

But how does it work? And why should you be interested in this over some other space game or MOBA?

These two points easily generate the vast majority of questions about the game. You see, if you say "Space Dogfighter" to someone, they immediately form a picture in their mind. It normally looks a bit like X-Wing, Conflict: Freespace, Wing Commander or, these days, Elite: Dangerous and Star Citizen. With that in mind, the questions tend to be "Why isn't it 3-D?" and "Why isn't it real-time?"

Constraining the action in this way makes it a lot easier for people to pick up and means things like a 3rd person camera become a doddle. It also means that players have a decent view of the battle, allowing them to make informed tactical decisions. These tactical decisions are at the very heart of Space Krieg - it's not a dogfighter, it's a tactical dogfighter.

Technically, it's turn-based with a short time limit, making it some kind of hybrid*. Players get a paltry 5 seconds to input their commands for the turn before everyone sees the results played out over the corresponding 2 seconds.

This system gives us an advantage or two over a 'regular' Space Dogfighter or MOBA.

For starters, whilst everyone wants to be be Maverick or Iceman, the reality is that the vast majority of them are closer to Goose or even Wash Out. That is to say, you're not a fighter pilot. Not even close. You may know what a joystick is or how it moves the various control surfaces to affect flight. You may even think you know what a Barrel Roll** is or perhaps a Split S, but all of that plays second fiddle to you being able to actually pull it off. Let alone under pressure, in a split second.

So we remove that time pressure and physical muscle requirement.

Instead of providing the game with the required joystick / throttle / rudder input, we've simplified the whole thing meaning that anyone can pull off these cool moves. Furthermore, by relaxing the time constraints - even if that's only 5 seconds, we give you time to consider what the best course of action would actually be. In short, this means that, when you look back at the moves you were able to make, you will feel like a regular Starbuck or Apollo***.

So much of the entertainment comes from watching the replay of the action. It's then that the awesomeness of the moves become more apparent - a well-timed jink to get right on someone's tail, a countermeasure dropped that forces a tracking missile to lash past mere inches from your engines, a risky jump to hyperdrive at 37% charge moments before the enemy torpedoes fly through where you just were and slam into the shooter's teammate. 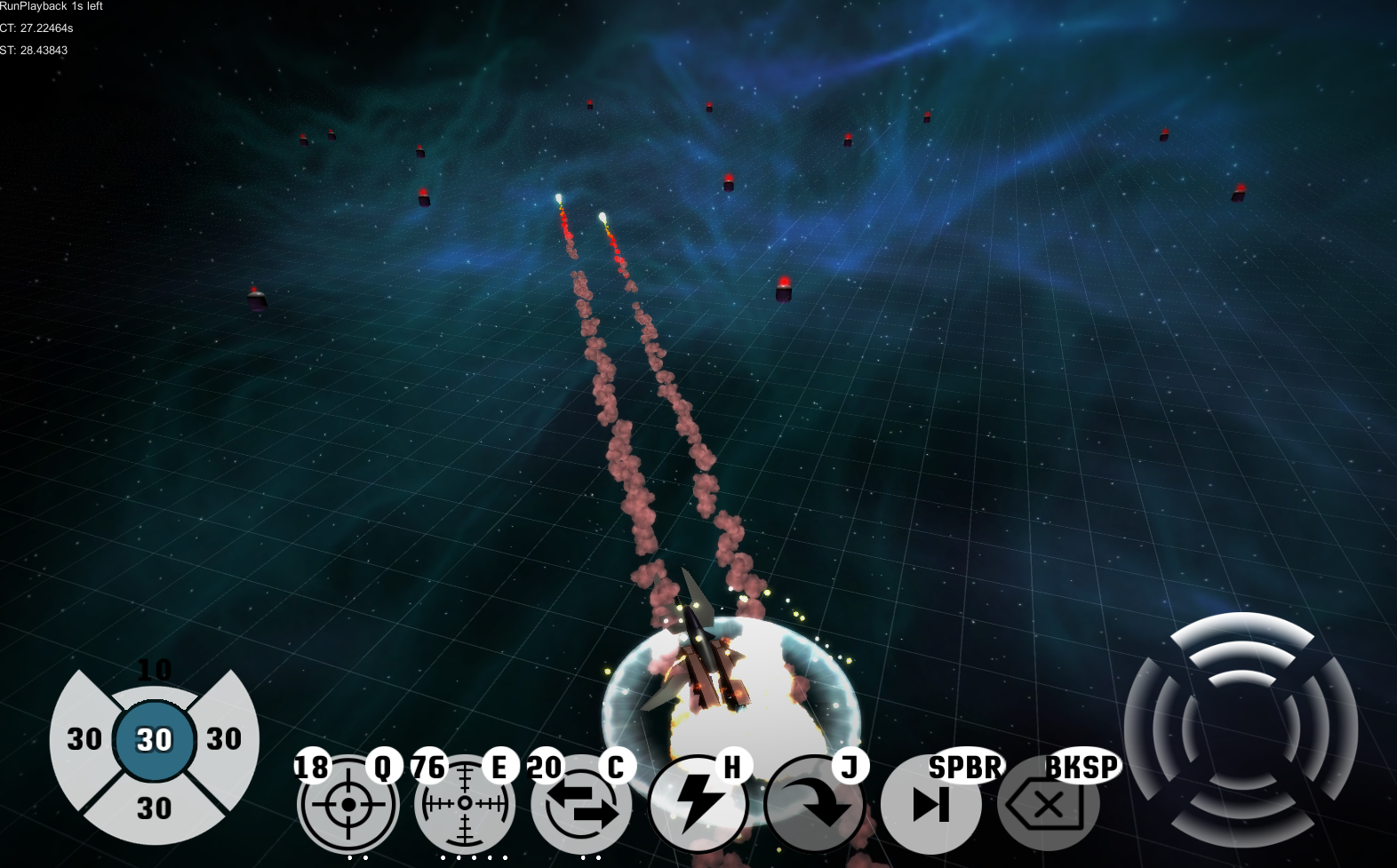 It's worth noting that, as part of way the existing network model works, the replay system is already up and running.

Another interesting benefit from a system such as this is that we suddenly become input independent. That means that you won't get an advantage from using one particular input method over another. Seriously - you can play this game just as well on a joypad or touchscreen as you can with mouse and keyboard.

It could be the first truly cross-platform MOBA****.

On a technical note, it also means that our networking code can actually handle some serious lag without affecting gameplay at all. Because of the turn system, you don't need to be pinging messages to the network however many times per second - just a little blip every 7 seconds should do the trick. Again, this should make the game more accessible as you won't need a kick-arse rig or phat pipe to be able to play. I wonder if it'll be playable on a tablet on 3G?

It's Fun But Is That Enough?

Space Krieg is one of those games that has quite the cult following. Anyone who has played the original will go a bit misty eyed when you mention the name. Even with what we have so far, I'm pretty confident that we'll be able to do a bit better than how people remember it.

But it's no longer enough to make a really fun game.

That, my friends, is only the beginning. On top of that, you need to be thinking about stuff like who you're aiming this stuff at and how you intend to get them to pay you for making it. Yes, it's Monetisation again.

My initial thoughts on this centred around the League Of Legends model. You know - that one that gamers in the industry bring up as F2P done right whilst the money grabbers bemoan its inefficient utilisation of its user base. In short LoL makes a shed load of money, but it could make so much more. The only reason it makes a shed load of money is because it has a user base measured in the hundreds of millions.

For us to adopt such a model - Free, fully-featured download, only pay for character unlocks, boosts and skins - we would have to reach as many users as they have for it to work. That's something that's just not going to happen. For starters, it's a harder to sell spaceships***** than it is to sell characters. Also, their characters hit up about every genre known to man, meaning that there's something for everyone, whereas our spaceships are only ever sci-fi. That's pretty niche right there.

So we'd have to look at some kind of paywall instead and get a higher percentage of our smaller audience giving us money for the privilege.

Premium is one way of going. But, as this is going to be something that we want to maintain and update, isn't going to pay the bills over a protracted length of time. We can buff that up with paid-for extra content - more ships and skins - but the initial price point will have to be kept as low as possible to make it easier for people to pick it up on spec.

Once again, Shareware emerges as one of the favourites. We let people download and try the game for free but at some point there will be a paywall that blocks off certain features of the full game.

The question then becomes "What features?"

To Gimp Or Not To Gimp

There is an incredible balancing act to getting the paywall right. Give away too little in the free version and people may not be hooked enough to upgrade. Give away too much and they may have seen all they need to see.

This problem is only exacerbated when you have multiplayer and people with the free version are able to face off against those with the full one.  If the free one feels too handicapped, accusations of "Pay to win" will abound - not something you ever want to hear associated with an eSport.

Other people have had this problem before. Introversion's Defcon, for example. That didn't let free players host their own games or even allow more than a certain number of them into an existing one. Ultimately, we're not going to have people hosting their own games - all manner of matchmaking wizardry will lurk behind the "Play" button - but it still fragments the playerbase. A Bad Thing.

Restricted ships perhaps? Again, regardless of how we frame it, there will always be a perception that these initial craft are for beginners and are somehow inferior to the others. As well as the aforementioned "Pay to win", it may also annoy full version players who happen to be "stuck" on a team with these freeloaders.

Of course, I may be overthinking this. There's a neat little mech game on iOS called Walking War Robots which has a simple twin currency model with certain mechs only being available for premium currency. That seems to work and you never feel like you're at too much of a disadvantage when you come up against these guys. WWR may also inform part of our game structure with players able to bring in a number of ships****** equal to however many (purchasable) hangar slots they have.

Perhaps it has to be somewhere between the two. Have a free rotation system whereby ships are available to try but can be made permanently available through purchase then also allow players to buy up bundles of ships in a Starter Pack of some description. Maybe don't even dictate the ships that form the bundle. Give players the choice of which, say 5, ships they'd like in their bundle - a kind of Pick 'n' Mix approach if you will.

Perhaps we just have a levelling up process with a cap for those on the free version. Certain ships will only be available at certain level thresholds. Or we could limit the player's ability to customise their craft until they pay up. Or... or...

It would seem that there are plenty of options here and, aside from a couple of conversations in the car, we haven't really talked about this aspect of the game that much.

But we should. We really need to get this bit right.

* I like to call it Real-Turn, but that's just me.
** Hint - it's not actually what Slippy asks you to do - people always leave out the vertical component.
*** Provided you have the tactical acumen to make the right decision in the first place.
**** Assuming, of course, the console manufacturers agree to play nice which, less face it, seems pretty unlikely.
***** Unless you're Chris Roberts, but no-one really knows how he's managed to pull that off.
****** One at a time, of course.