Game that you should play #4

I want to play Sim City V. I want to play it a lot. It seems, however, the universe has other ideas, what with the state of their servers and the fact that I only appear to have access to Macs now - that well-known state of gaming exile - oh, and Origin.

So it's time to dip into the vaults and dig up a classic. 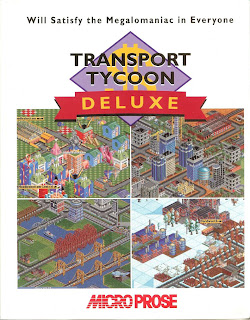 Or, to be more precise, Open Transport Tycoon Deluxe. Yes, after the old stager had shuffled off this retail coil, someone had the sense to make the whole thing open source so that the legion of fans could continue to love it and maintain it as only a legion of fans can. This means several things -

Firstly, the game is now free. Note, free as distinct from Free2Play. It won't cost you a penny. Not a damn thing. As such, this represents phenomenal value for money*

Secondly, it appears to work on Mac. Also, Linux of all things - you can always count on the open source community to throw down a Linux version at the first opportunity.

Transport Tycoon is a giant, virtual train set. Only it's not just trains - there are planes and trucks and buses and boats and helicopters. Build up your transport empire from nothing and service the nation, ferrying goods and passengers wherever they need to go.

The landscape is dotted with towns, cities and businesses. It's your job to transport resources to anywhere that needs them in an effort to make more money than the next guy. To do this, you'll do your market research (locating a business producing the commodity required and finding a suitable destination for said product), lay down some infrastructure (roads, rails or even canals - canals FFS!) then zinging a suitable vehicle along the route. Simples.

The simplest and cheapest approach is to use road vehicles. Lorries for goods or buses for passengers. You can lay down roads to connect towns or businesses, then any road vehicle can happily trundle along them, shuttling goods back and forth.

Planes are expensive, but, beyond airports at either end, require little in infrastructure. The same applies to boats where the trade off is speed in exchange for a much larger payload.

But for most people, it's the trains that will appeal. Laying down train line isn't as simple as roads that will quite happily multiple vehicles occupying the same bit of land - you've got to think about things and engineer a line that will ensure that your trains get where they need to go without slamming into each other. Also, unlike roads where everyone can use them, only the owner of the track can run trains on it. This often causes conflict as players will find themselves having to deal with competitors' routes criss-crossing their own.

Laying down train lines will also have you spending a disproportionate amount of time thinking about the merits of various systems of signalling. Yes, here, in Boss Alien Towers, not a day goes by without at least one person starting up a conversation about track layout and efficient deployment of train signals. Signals! Signals alone can spark off many a discussion. It takes our normal level of geekiness to entirely new heights and you know what? I'm fine with that.

There is something so thrilling about watching your train-based empire go about its daily business. "Thrilling" might seem to be a bit of a misnomer, but I guess it taps into the same sort of thing as watching your Sim City prevent itself from imploding or seeing your creatures defending their dungeon from invaders. There's a voyeurism to it.

Couple that with a desire to tweak and make everything run efficiently and you've got a heady mix indeed. Again, it's not without frustrations - the occasional train running the wrong way and causing chaos, a factory shutting down negating your investment in that stub line, etc. - but the moments when everything just clicks and the whole thing is like clockwork. A well-oiled machine, constructed by you. A golf swing.

Everything else is just supply and demand. The simplest and possibly most reliable source of income is the humble passenger or item of mail. These are generated by cities and towns. Of higher risk (and subsequently greater payoff) are the goods chains. Providing raw materials to factories will allow them to produce goods which can be sold at larger towns or cities. The more you can supply the various points in the chain, the more goods your factory will produce and the greater the opportunity for profit.

As always, it's the multiplayer that really appeals. OpenTTD allows many players to play on the same landscape. At the time of writing, myself and the other Boss Aliens are in the middle of an epic 10 player world. I am very excited by this prospect.

Each player forms their own company and builds their transport empire. For the most part, this is a pretty solitary experience, in so much as the player has plenty on his plate to deal with regarding infrastructure and fleet maintenance. But then he'll often find himself competing with his rivals for services. To this end, it's vital to retain decent working relationships with the local councils and make a name for his stations and services.

There are several things to take into account with this. Firstly, it's important to provide a decent service. This means delivering as much of the cargo available quickly, reliably and efficiently. Unlike Pocket Planes, goods that are left in stations for too long will be removed and the provider of those goods will start to look elsewhere.

Secondly, it's important to keep any disruption to the locals to a minimum. This means not bulldozing houses or roads whenever possible - something that is often at odds with your need to expand facilities, especially in the more urban locations.

Good relationships with the council will allow you a greater scope for expansion as well as make people more likely to choose your company over your rivals. You can also spend money on a series of options to either improve your perceived standing (advertising, building statues, outright bribery), grow the town (funding new buildings) or outright screw over any nearby competitors (funding road re-development or buying exclusive rights). It's vital to keep the local council onside at all times as there's nothing more depressing than clearing a nice route or patch of land for a new station or airport and having the council refuse you planning permission.

As you service the town, it expands and grows - both upwards and outwards. Large town means more People and Mail. It also means the town might start accepting Goods or build a bank and allow trade in Valuables - both very lucrative propositions. On some maps, all a town needs is people. On winter landscapes the town also needs Food. In desert terrain it might also require Water.

Let's be clear about something - this game is the thick end of 20 years old. Those of you expecting realistic 3D environments, complex motion captured animation and a metric shit-load of particle effects are going to be disappointed. But then I'm also disappointed in you, so we'll call that even.

The community have managed to update some of the interface - intelligent track or road placement for example - but it's still possible to be swamped in a mire of windows, each showing some piece of presumably vital information.

Also, altering the terrain is simplicity itself (albeit very expensive) for anyone who has played either of the first two Populous games. If you're too young for that, it turns out the isometric landscape may prove to be a bit confusing. But it's worth bearing in mind that trains and land vehicles have real difficulty getting up hills, especially in the early game or when they're fully loaded. Cuttings and embankments to keep everything nice and level will cost you money at the start but make life so much easier in the long term.

You don't "win" - it's not that sort of game. Whilst there's a progression (new vehicles and technology get unlocked as the game progresses), there isn't really an end game to speak of. There's also a company leaderboard that can be brought up at any time although, again, there's no real win condition per-see.

There's certainly a lose condition - run at a loss for too long and your entire company will be put up for sale and offered to the other players for purchase. It's then up to them to decide whether or not to buy you out and dump you out of the game. TBH, this happens so rarely as to not really be worth mentioning. As a player, you'd have to really try hard to get your company into such a state. Of course, that's not to say it isn't a very satisfying thing to do to another player...

You can, if you wish, really attempt to game the system and screw your competitors over. In fact, against the AI, I'd say go for it, but against your friends... well, it just isn't that sort of game. We've formed a few Gentleman's Agreements to cover most eventualities - no deliberately ramming your trains into other people's road vehicles, no buying exclusive rights to towns you're not actually supplying, etc.

But it's almost a co-operative game. A shared experience in which you're all trying to steer a series of transport companies through the technological advances from the 1950s onwards. We were very excited to move from Steam to Diesel and having to upgrade all of our tracks to Electricity. Next up is Monorails and Maglevs.

We're too excited about that.

*Value mitigated by the fact that you will spend an inordinate amount of time doing this at the expense of many other things that you could / should be doing instead. It's a time vampire and no mistake. I even missed the Dark Souls 2 gameplay video release on IGN because of this - it's that good.
Labels: games review transport tycoon